The beginning of the modern bitumen industry can be attributed to 1712 when bituminous stones were discovered in France. Bitumen is usually used in two areas of road construction and insulation. Bitumen, which is obtained from the distillation of crude oil, is called bitumen or distillation bitumen.

The name of the matter (English): Tar

Bitumen is a mixture of organic liquids that are highly viscous, black, sticky and highly soluble in carbon disulfide, the main ingredient of which is the highly concentrated polymers of polycyclic aromatic hydrocarbons. Naturally, raw bitumen is a sticky and dense form of oil that is very heavy and heavy so that we have to heat it to move on. The bitumen extracted from petroleum or special mineral gems is called pure bitumen, which is classified according to its origin. Pure bitumen is also subjected to other processes in order to find the properties for different applications and various types of bitumen (Including blown bitumen, Bitumen dissolved, emulsion bitumen, polymer bitumen, etc.). The Sumerians, the Assyrians, and many early civilizations used bitumen widely. It was used as an anti-moisturizer, as well as for wood preservatives and for various items such as balms, sculptures and decorations. Also found in natural substrates, along with cooked bricks in mastic in temple buildings, bridges, streets, and houses. The beginning of the modern bitumen industry can be attributed to 1712 when bituminous stones were discovered in France. At that time, the bitumen material was simply spat on the surface of the local roads, and they waited for the traffic to gradually split them down and then squeeze on the ground. This technique was quite successful and shortly thereafter improvements were made in the work, by pouring and heating the material. Then the asphalt was tight and hardened by grinding and flattening the iron. This material, commonly known as Compressed Rock Asphalt, was used extensively in the streets of Europe. And this trend continued gradually, so today, with the advent of science and technology, bitumen is widely used in various industries for various uses, including road construction, floor covering, roofing, underground pipes, metal protectors, reservoir seals, channels Bridges, stabilization of sand, staining and so on.

Uses: Bitumen is commonly used in two areas of road construction and insulation. About 90 percent of bitumen is used in road construction, and insulating costs account for only 10 percent of bitumen consumption. Insulation: Bitumen is usually used to insulate roofs and flooring of bathrooms. Usually, in order to bitumen fixation, it is used with a sack, which is called "sacking bitumen". Gingival fibers play the role of the corrector and give place to bitumen in their texture. Also, products such as bitumen cardboard or bitumen wad with trademarks such as insulation, etc., also have similar workings. Blocks or macadam is used to prevent the penetration of soil moisture into the floor of the building.

Physical and chemical properties of bitumen:

Bitumen is usually obtained from the distillation of crude oil. Such bitumen is called distilled bitumen or oil bitumen. oil bitumen is a product of two stages of distillation of crude oil in the distillation tower. In the first stage of distillation, light materials such as gasoline and propane are separated from the crude oil. This process is carried out at a pressure close to atmospheric pressure. In the second step, heavy compounds such as diesel and kerosene are also released. This process takes place at a pressure close to the vacuum. Eventually, remains are a mixture of very tiny solid particles called asphaltenes which are immersed in the gravel-like fluid called the Multan. But some types of bitumen in nature, due to the gradual conversion of crude oil and evaporation of its volatile matter, have been obtained over many years. Such bitumen is called natural bitumen and its durability is more than oil bitumen. Such bitumen may exist in pure form in nature like (lake bitumen), such as Lake Behbahan in Iran, and Trinidad in the United States, or extracted from mines (mineral tar). Bitumen is also known as Uintaite. The blown bitumen is obtained from blowing hot air into a pure bitumen at the final stage of the purification process. In this process, hot air with a temperature of 200 ° C to 300 ° C is blown through a perforated tube into a compartment containing bitumen. As a result of this process, the hydrogen atoms of bituminous hydrocarbon molecules are combined with air oxygen so they create water and polymerization occur. Blown bitumen has a lower degree of penetration than pure bitumen, it has a higher degree of softness and less sensitivity to temperature variations. This type of bitumen is used to make roofing sheets, car batteries and lacquering. The abbreviation R is used for blown bitumen. For example, 80/25 R bitumen means blown bitumen with a degree of softness of 80 and a degree of penetration of 25. The mixed bitumen is the name of bitumen and a suitable solvent (for example, kerosene or gasoline) mixed together. This bitumen is liquid at ambient temperature, or it is slightly converted to liquid with a bit of heat. The mixed bitumen is used in a variety of coatings and macadam asphalt. The pace or hardening of this type of bitumen depends on the type of solvent. For example, due to the high evaporation rate of benzene, the bitumen solved in benzene gets rigid more quickly. This bitumen is called the Rapid Curing bitumen (RC). Also, bitumen solved in petroleum is called medium curing (MC) and bitumen, which is dissolved in petroleum gas or Furnace petroleum is called slow curing (SC). Soluble of bitumen are graded according to their viscosity grade.

Bitumen can also be stored or transported at temperatures above 100 ° C but burns in contact with hot materials. Bitumen has toxic and flammable substances, such as hydrogen sulfate, and is commonly found in its vapors. Bitumen causes burns 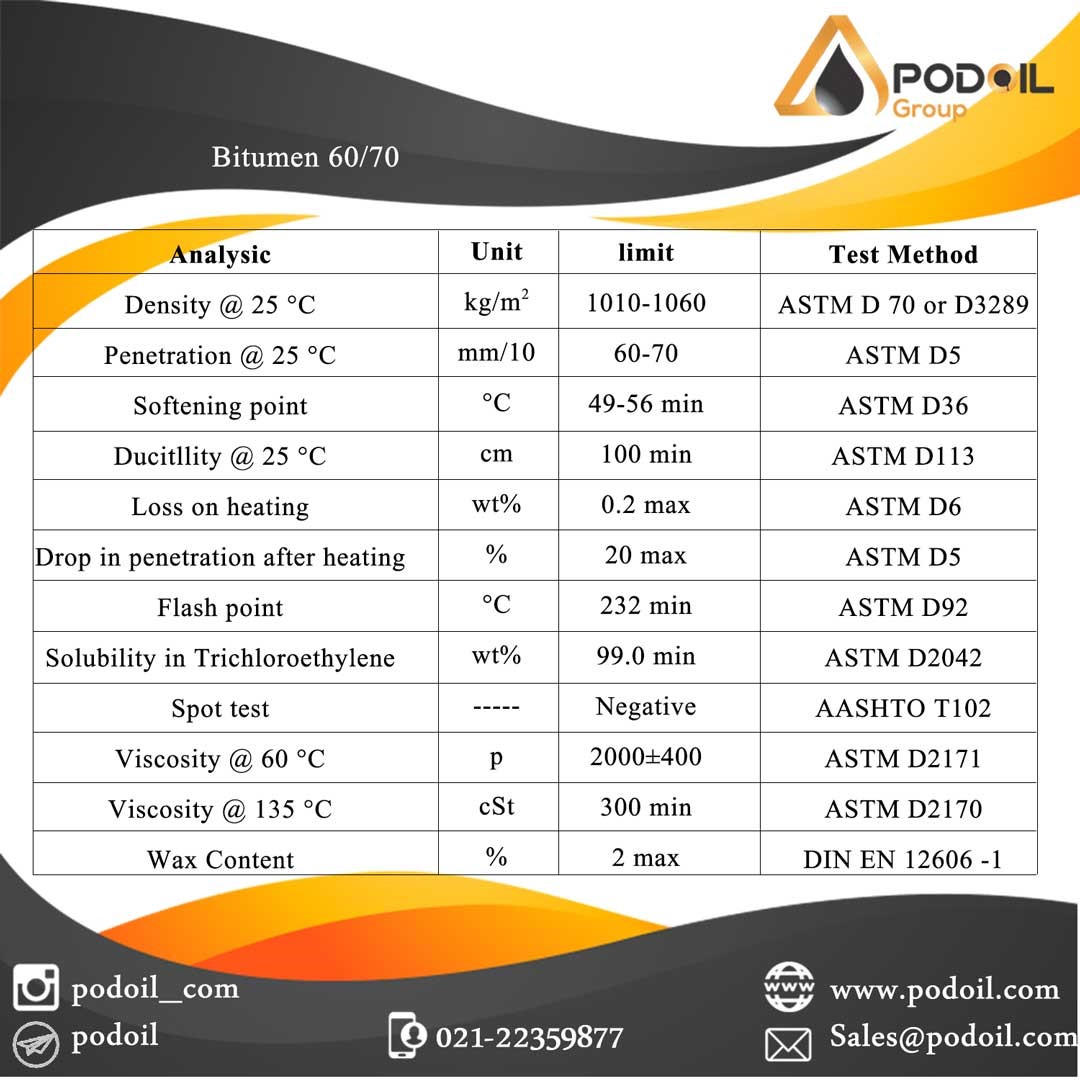