Iso Feed is the refinery Isomax Unit feeder, which describes the process as follows:

The task of the Isomax machine is to convert wax oil gas into a vacuum distillation to useful products such as gasoline, kerosene and light gas oil. The heavy-wax oil of distillation in the vacuum after mixing out of this tower is formed by the name of the   feed of the device. The nitrogen and sulfur content of the compound is converted to hydrogen and, accordingly, converted to ammonia gas and hydrogen sulfide, respectively. Products of these interactions are sent to the separation section after leaving the reactors. In the towers of this part, the gases from the refinery, butane, light naphtha and heavy oil, kerosene and gas oil are separated from each other. The heavy naphtha is used to modify the calorific value to the catalytic converter unit, and light naphtha is used to mix with the final gasoline product. The kerosene and gas oil of the   plant are very good, and after mixing with kerosene and gas oil, the distillation unit is supplied as the final product. The hydrogen needed for this device is provided by the hydrogenation unit. 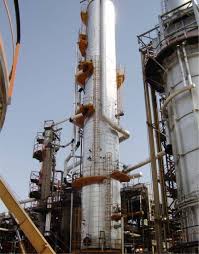