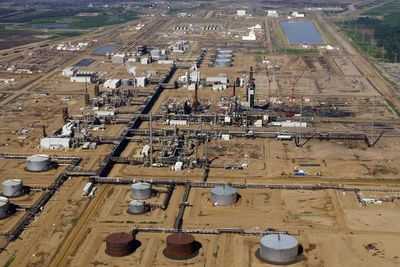 Bitumen upgrading
Bitumen upgrading is the chemical treatment of bitumen that is used in an attempt to increase its value by creating a substitute for high quality crude oil, known as a synthetic crude oil. Generally this involves reducing the viscosity of the bitumen to allow for shipment. This process allows the bitumen to be processed into fuels at existing refineries which would otherwise be incapable of dealing with the untreated bitumen.
Process
Through a series of different chemical processes it is possible to make low-quality, thick bitumen into a higher quality synthetic crude oil. The first step is the removal of naturally occurring light components while also recovering the diluent used to transport the bitumen. This procedure occurs in a diluent recovery unit. These operate similarly to a fractional distillation tower in the way they separate these components out.
From here, the light gas oils that were removed are sent to hydrotreaters and the diluent is recycled. The next step involves the vacuum distillation of the leftover bitumen component in a vacuum distillation unit. This unit removes the rest of the gas oils and sends them to the hydrotreaters. The leftover heavy components from the vacuum distillation unit are sent to conversion units.
Next, the bitumen travels to a conversion unit. Two common conversion units are fluid cokers and hydrocrackers. The processes in this step are performed on large molecules that will not distill, sometimes called "residue". Fluid cokers break up long chain bitumen molecules into more valuable short chain molecules through a thermal conversion. These short chain molecules can include heavy gas oil, light gas oil, and naphtha. This process of breaking complex hydrocarbon chains is known as coking. The hydrocracker uses a catalyst and hydrogen to convert bitumen into more useful gas oils and naphtha.
Once these smaller chain, useful molecules are obtained they undergo hydrotreating before they are mixed into synthetic crude oil. This hydrotreating removes sulfur and nitrogen, replacing it with hydrogen. The intermediate naphtha and gas oil products are pumped into hydrotreater units that operate at high temperatures. These use catalytic reactors to remove the impurities, resulting in a crude oil blend of naphtha, light gas oil, and heavy gas oil